Sitting here at the bus station heading from Bilbao to San Sebastián. Thought I’d leave plenty of time to get tickets, etc. I tried the machines first and saw that the next one was at 5pm. It’s now noon. So, no that doesn’t jibe with my “research.” There’s supposed to be one every hour. Luckily there’s a puce-jacketed helper who tells me that there are other bus lines. Just go to the 2nd window and ask there. Whew!

OK, the gentleman there is very helpful and asks me when I want to go. Next One, yes! As he prints out the ticket he says 12:30. Great, that’s only 1/2 hour from now. I head down to the bus slots and see which one goes at 12:30. It says #2. I get in line. However the bus destination says Bergara. Well…I’m thinking that Bergara is further south but they probably stop in San Sebastián on the way. There aren’t very many people in line. So, 12:15 rolls around and I decide I’d better ask someone. I check with another bus driver who looks at my ticket and he says, whoops, you’re ticket is for Noon. And you missed the bus. I look at my ticket and it says 12:30. No, he says, that’s what you paid. 12.30 euros. The bus time is in smaller print below and lo and behold says 12:00 (Noon).

What a doofus. I’m always advising people to check and recheck and ask again but no, I’ve got it all planned and researched. It turns out my research was fine…there is a bus every hour. But in getting there early and having trouble with the ticket machine it put me in a bit of a panic and I just rushed off. It’s like when I was in Frankfurt and a fellow traveler told me what gate my connection was leaving from. It turned out the gate was right next door to where I de-planed. Just can’t learn, can I?

Anyway, I’m on the 1:00pm bus. The ticket vendor thought it was pretty funny that I confused the amount with the time. Ha Ha. 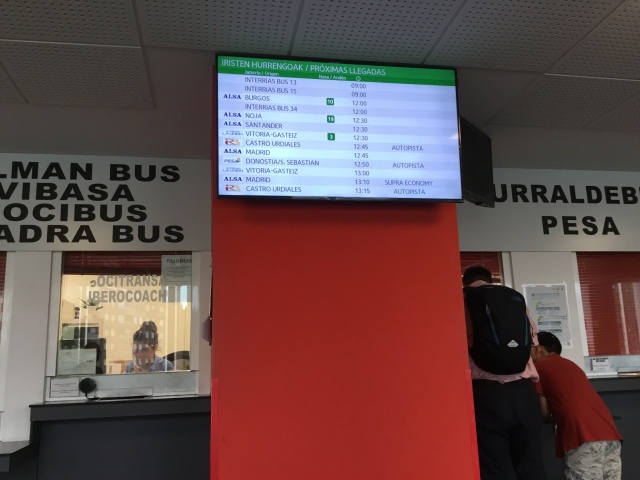 An avid traveler, trader and terpsichorian
View all posts by micetrail →
This entry was posted in Uncategorized. Bookmark the permalink.